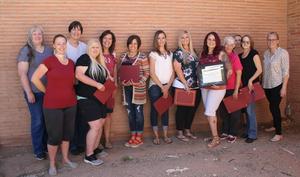 Friend of Education is an award given to a community group each year that has demonstrated outstanding leadership and service for the Grand County School District. The Child Nutrition Program was nominated by school employees and selected by the Grand County Board of Education for being “amazing as they have prepared and delivered thousands of meals these past weeks.”

Over 55,000 school meals have been served in the community since schools closed on March 16 due to Covid-19.

“Nobody is working harder to feed kids in Moab than you,” Taryn told the kitchen staff, adding that it’s the “golden-age” of school food as the program has grown. “You’ve all done a remarkable job.”

When students were in school, about 16,000 meals were served in February. But by April that number climbed to 20,518 for the month as the district moved forward to deliver bagged breakfasts and lunches at school bus stops for all children in Moab whether or not they attend Grand County schools.

The staff is continuing to prepare meals that are being offered through June. (Anyone may pick up bagged lunch for children between 11 a.m. and 12:30 p.m. at Helen M. Knight Elementary.)

Alysha Packard is the director for the Child Nutrition Program and Debra Rappe is the program’s retired director who came back on Jan. 6 to work during the interim this year after a director left mid-year and pursued a new career.

Debra had retired in 2017 as director of the Child Nutrition Program. When asked how she felt about coming out of retirement to lead the program through Covid, she said, “To me it was like a God thing, and I felt he called me back to work.”

“I love the kitchen staff. They’re good people to work with.” Debra said. “I’m so thankful for the whole crew and how the parents recognize how hard the food crew works.”

Although she thought she would be the interim director for “a few weeks” as the district searched for a replacement, she stayed for four months.

Alysha Packard was hired in May as the district’s new Child Nutrition Program director. She is relocating to Moab from Grand Junction, CO., and has 10 years of experience in management and public school nutrition programs. Grand County School District employees said Alysha is already bringing a lot of energy to the Child Nutrition Program.

“School food is usually underestimated,” Alysha said, “but I think this is a great opportunity so families can see how great school food is and how rewarding it is for everybody.”

Alysha said Covid has made adapting the Child Nutrition Program interesting and said the staff is already planning ways to serve food when school resumes on Aug. 20.

“We’re still here and we’re going to make sure everybody gets fed,” she said.

Due to the Covid crisis, the district’s annual presentation and awards ceremony was cancelled. The Child Nutrition Program staff was honored on June 9 at the Grand County School District with Friend of Education awards.